The Foundation and partners recently convened the National Myrtle Rust Symposium, with over 200 delegates either attending in-person or online.

The symposium brought together key stakeholders together to build a community of interest, share knowledge and build co-ordination and implementation of the National Action Plan. Presenters shared the latest research, response, surveillance and conservation activity, framed against the Action Plan. See our media release for more detail.

We had an awesome line up of more than 50 speakers, from international scientists, to people on the ground trying to save species from extinction and many more.

To watch a whole session, go to the links below.

Overview of the disease
Geoff Pegg, Queensland Department of Agriculture and Fisheries

Indigenous custodians of the land are concerned about the impact of myrtle rust, plant biosecurity threats, pests, and diseases on our country
Michael Robinson on behalf of Linda Ford

The impacts of Myrtle Rust – the story so far
Angus Carnegie, NSW Department of Primary Industries

The increasing threat of exotic pests and diseases of environmental significance
Mike Wingfield, University of Pretoria

RNAi vaccines as a novel control for Myrtle Rust
Anne Sawyer, The University of Queensland

Overview – strains and pathways …
Alistair McTaggart, The University of Queensland

An overview of recovery options – one size does not fit all
Bob Makinson, Australian Network for Plant Conservation

For more information please contact the Foundation through mractionplan@apbsf.org.au or Michael Robinson on 0419992914.

The Conference Team and the Plant Biosecurity Science Foundation is grateful for the support of the NSW Saving our Species program, the Threatened Species Recovery Hub, and the 2021 Australia Biosecurity Symposium hosted by the Biosecurity Collective.

Please review the Foundation’s range of Myrtle Rust projects below.

The Foundation and partners are developing a range of Myrtle Rust Knowledge products resulting from the Symposium, supported by the Department of Agriculture Water and Environment through the Environmental Biosecurity Found.  Watch this space!

Myrtle Rust is a plant disease caused by the introduced fungal pathogen Austropuccinia psidii and it poses a serious and urgent threat to Australia’s native biodiversity. Myrtle Rust affects plant species in the family Myrtaceae (paperbarks, tea-trees, eucalypts, and lillipillies), which are key and often dominant species in most Australian ecosystems. To date it has proved capable of infecting 382 native species and this number is growing. Serious declines towards extinction are underway in some species, and broader ecological consequences are expected. Myrtle Rust is likely to have a significant impact on matters of national environmental significance protected under national environment law, including listed threatened species and ecological communities, wetlands of international importance, world heritage sites, and national heritage places.

The Action Plan is supported by Myrtle Rust reviewed: The impacts of the invasive plant pathogen Austropuccinia psidii on the Australian environment (R.O. Makinson 2018), a valuable resource to be read in conjunction with the National Action Plan.

For further information on the Plan, please email info@apbsf.org.au. 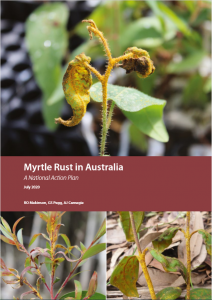