The planthopper, spotted lanternfly (Lycorma delicatula: SLF), is an emerging pest of agricultural, urban and environmental biosecurity concern, attacking over 70 plant species. It recently spread from its native range of China, Vietnam & India into South Korea, Japan, and the northeastern US and is considered a significant ecological and economic threat to ornamental plants, forests and agriculture In NSW, Australia alone, SLF has been identified as a potential host of grapes, apples, peaches, plums, walnuts, blueberries, cherries, basil, apricot, and nectarines and is considered a severe threat to the $1.79 billion NSW horticulture industry

The ‘Tree of Heaven’ (Ailanthus altissima) (Mill.) Swingle (Simaroubaceae), is the SLF’s preferred host plant. Tree of Heaven is widely naturalised throughout the coastal and sub-coastal regions of south eastern Australia and is regarded as an environmental weed in NSW, ACT, Vic, SA, Qld and WA. It is considered invasive and readily escapes cultivation into disturbed woods, roadsides, vacant areas, and railroad areas. The potential for SLF to establish quickly in Australia is likely to depend on climate and, in part, on the presence of the ‘Tree of Heaven’ and other key woody hosts. Further, given Tree of Heaven’s presence in urban environments, including botanical gardens, human spread of the insect is of concern.

The Foundation, cesar and the Australian Government are co-investing in a new project to prepare Australia for the SLF. It will review the literature, identify the potential distribution, compile and map a list of the reported hosts plants and develop communication material. 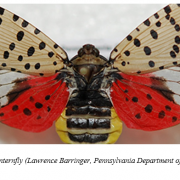 Spotted lanternfly biology, ecology and awareness in the Australian environment (PBSF039) COMPLETE
Exploration of RNAi vaccines as a novel control for Myrtle Rust in critically... Biosecurity Warrior working with kids, supported by the Foundation …
Scroll to top